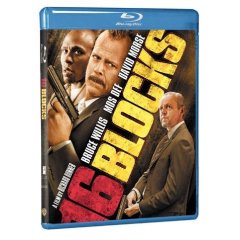 An aging cop is assigned the ordinary task of escorting a fast-talking witness from police custody to a courthouse.

Please note this is a region B Blu-ray and will require a region B or region free Blu-ray player in order to play.   For a New York cop and his witness, the distance between life and death just got very short!   Boozy and disillusioned, aging cop Jack Mosley (Bruce Willis) is assigned the seemingly ordinary task of escorting a fast-talking witness (Mos Def) from police custody to a courthouse. However, even with 2 hours to make 16 blocks, this is no ordinary court case and there are forces inside and outside the police who will do anything to prevent the duo from reaching their destination alive...     Actors Bruce Willis, Mos Def, David Morse, Jenna Stern, Casey Sander, David Zayas, Cylk Cozart & Richard Fitzpatrick Director Richard Donner Certificate 12 years and over Year 2006 Screen Widescreen 2.35:1 Languages English - PCM (5.1) Duration 2 hours (approx)

Action starring Bruce Willis. Aging cop Jack Mosley (Willis) has seen better days, and all that the force expects out of him these days is to stay out of trouble while he's on the clock. Eddie Bunker (Mos Def) is set to testify before a grand jury at 10am, and it's up to Mosley to make sure that Bunker makes it to the courthouse in one piece, a job that Mosley estimates will take a maximum of 15 minutes. However, a black van has been trailing the pair and after stopping off at a nearby liquor store to pick up some breakfast, Mosley emerges from the store just in time to save Eddie from the lethal bullet of a determined assassin. When backup arrives in the form of Detective Frank Nugent (David Morse), Mosley quickly realises that the detective on Nugent's team is the same cop that Bunker is set to testify against. Now faced with the tough task of dodging bullets and eluding a massive onslaught of corrupt cops, Mosley must keep Bunker alive long enough to get him before the judge and ensure that justice is served.