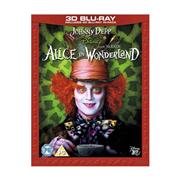 Coming to the big screen in Disney Digital 3D on March 5, 2010, "Alice in Wonderland" is an epic fantasy adventure starring Johnny Depp as the Mad Hatter.

Please note this is a region B Blu-ray and will require a region B or region free Blu-ray player in order to play. Tumble down the rabbit hole with Alice for a fantastical new adventure from Walt Disney Pictures and Tim Burton. Inviting and magical, Alice In Wonderland is an imaginative new twist on one of the most beloved stories of all time. Alice (Mia Wasikowska), now 19 years old, returns to the whimsical world she first entered as a child and embarks on a journey to discover her true destiny. This Wonderland is a world beyond your imagination and unlike anything you’ve seen before. The extraordinary characters you’ve loved come to life richer and more colorful than ever. There’s the Mad Hatter (Johnny Depp), the White Queen (Anne Hathaway), the Red Queen (Helena Bonham Carter), the White Rabbit (Michael Sheen) and more. A triumphant cinematic experience – Alice In Wonderland is an incredible feast for your eyes, ears and heart that will captivate audiences of all sizes.   Subtitles 2D Blu-ray: English / English for the hearing impaired / Dutch 3D Blu-ray: English / English for the hearing impaired / Italian / Spanish / Swedish / Finnish / Icelandic / Portuguese / Polish

Tim Burton and Disney join forces for this 3D fantasy adventure based on the characters from the Lewis Carroll classics 'Alice's Adventures in Wonderland' and 'Through the Looking Glass'. Mia Wasikowska stars as the 19-year-old Alice, who returns to the magical world of her childhood adventure to reunite with her friends the Mad Hatter (Johnny Depp), the White Rabbit (Michael Sheen), Tweedledum and Tweedledee (both played by Matt Lucas), the Dormouse (Barbara Windsor), the Caterpillar (Alan Rickman) and the Cheshire Cat (Stephen Fry). Alice discovers her true destiny as she joins forces with the colourful denizens of Wonderland to overthrow the wicked Red Queen (Helena Bonham Carter). The film won Academy Awards for Art Direction and Costume Design.