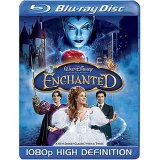 A classic Disney fairytale collides with modern-day New York City in a story about a fairytale princess thrust into the cynical Big Apple by an evil queen.

Please note this is a region B Blu-ray and will require a region B or region free Blu-ray player in order to play. This musical Disney fairytale is the story of Giselle (Amy Adams) who is soon to be a princess in the fairytale world she lives in where animals can talk and everyone lives peacefully together in bliss. Suddenly she is thrust in to the harsh reality of the human world more specifically New York. Her views on love and life start to change as she realizes it does not always end 'happily ever after'. A mixture of animation and live-action features an array of references to Disney's past and present works. Starring Patrick Dempsey Susan Sarandon Amy Adams and James Marsden.

An animated fairy tale meets modern, live-action comedy. The story follows the beautiful princess Giselle (Amy Adams) who is banished by an evil queen (Susan Sarandon) from her magical, musical animated land and finds herself in the gritty reality of the streets of modern-day Manhattan. Shocked by this strange new environment that doesn't operate on a 'happily ever after' basis, Giselle is now adrift in a chaotic world badly in need of enchantment. But when Giselle begins to fall in love with a charmingly flawed divorce lawyer (Patrick Dempsey) who has come to her aid - even though she is already promised to a perfect fairy tale prince back home - she has to wonder: Can a storybook view of romance survive in the real world?