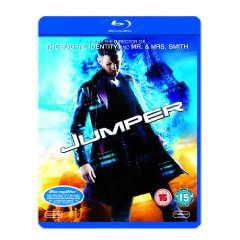 A teenager from an abusive household discovers he can teleport from one place to another. He uses this ability to search for the man he believes is responsible for the death of his mother.

Please note this is a region B Blu-ray and will require a region B or region free Blu-ray player in order to play.  Based on the novel by Steven Gould and from the director of The Bourne Identity comes Jumper - featuring a host of stars including Hayden Christensen, Samuel L Jackson, Diane Lane and Jamie Bell! A teenager from an abusive household discovers he can teleport from one place to another. He uses this ability to search for the man he believes is responsible for the death of his mother, drawing the attention of the NSA, and another youth with the same power... Actors Hayden Christensen, Samuel L. Jackson, Diane Lane, Jamie Bell, Rachel Bilson, Tom Hulce & Sean Baek Director Doug Liman Certificate 15 years and over Year 2007 Screen Widescreen 2.35:1 Languages English - DTS-HD Master Audio (5.1) Additional Languages Italian ; Spanish Subtitles Italian ; Spanish ; Danish ; Finnish ; Norwegian ; Swedish ; English for the hearing impaired Duration 1 hour and 24 minutes (approx)

Sci-fi action blockbuster with Hayden Christensen as a young man able to teleport himself to any place on earth. After discovering he has a genetic anomaly that allows him to teleport wherever he wants, teenager David Rice (Christensen) embarks on a hedonistic lifestyle of girls, money and travel, indulging his every whim, and using his power to fund his desires. It's not long, however, before he discovers that others share his power, and that the underground community of 'Jumpers' are being targetted by 'Paladins', a group dedicated to their destruction. Pursued by a Paladin named Roland (Samuel L. Jackson), Rice and fellow jumper Griffin (Jamie Bell) soon find themselves fighting for their lives as their sworn enemies close in.