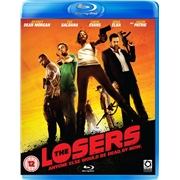 The Losers stars Jeffrey Dean Morgan (Watchmen) as Clay; Zoe Saldana (Avatar, Star Trek) as Aisha; Chris Evans (Fantastic Four) as Jensen and Idris Elba (The Wire) as Roque, in an incredible action adventure that has to be seen to be believed!

A group of black mercenaries plan their revenge against the government that set them up for death in the Legendary PicturesWarner Bros adaptation of the Vertigo comic STOMP THE YARD&39;&39;s Sylvain White directs from a script by James Vanderbilt (ZODIAC) WATCHMEN&39;s Jeffrey Dean Morgan heads up the cast which also includes Chris Evans Zoe Saldana and Idris Elba with Jason Patric handling the villainous duties in the film

Action adventure based on the Vertigo comic strip. After being double-crossed and left for dead, a group of CIA operatives (Jeffrey Dean Morgan, Chris Evans, Idris Elba, Columbus Short and Oscar Jaenada) joins forces with the mysterious Aisha (Zoe Saldana) to track down and wreak revenge on the mysterious Max (Jason Patric), the power-hungry warmonger who set them up for assassination.