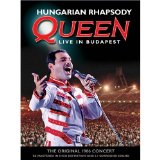 Coverage of the iconic rock band Queen's 1986 concert in Budapest, Hungary. The gig was notable for being played behind the Iron Curtain, with the crowd of 80,000 making it one of the largest music events held in Eastern Europe. With the band riding high on the wave of goodwill following their performance at Live Aid a year earlier, the gig arguably captures them at their peak. The songs performed include: 'Under Pressure', 'Bohemian Rhapsody', 'I Want to Break Free' and 'We Will Rock You'.