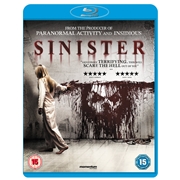 Struggling true crime novelist, Ellison (ETHAN HAWKE), becomes too close to his latest gruesome story when he discovers a box of mysterious and brutal home movies in his attic.

Please note this is a region B Blu-Ray and will require a region B or region free Blu-Ray player in order to play.   A true-crime writer finds a cache of 8mm "snuff" films that suggest the murder he is currently researching is the work of a serial killer whose career dates back to the 1960s.     Actors Ethan Hawke, Juliet Rylance, Fred Dalton Thompson, James Ransone, Michael Hall D'Addario & Clare Foley Director Scott Derrickson Certificate 15 years and over Year 2012 Screen 2.40:1 Languages English - DTS-HD Master Audio (5.1) Subtitles English ; English for the hearing impaired Closed Captions Yes Duration 1 hour and 50 minutes (approx)

'Found footage' horror film starring Ethan Hawke. Ellison (Hawke) is a true crime author, in search of a new story, who moves with his unsuspecting wife, Tracy (Juliet Rylance), and two young children into a house in which a horrifying quadruple murder recently took place. However, when Ellison opens a box of Super-8 film reels he finds in the attic, even the inquisitive author gets more than he had bargained for...