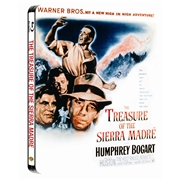 Treasure Of The Sierra Madre [Blu-ray]