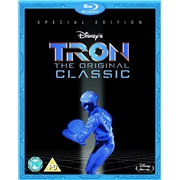 Experience the original landmark motion picture that inspired a new generation of digital filmmakers and became a favourite of fans and critics across the world. Relive the electrifying thrills of Tron with an allnew state-of-the-art digital restoration and enhanced high-definition sound. When a brilliant video game maker named Flynn (Jeff Bridges) hacks the mainframe of his ex-employer he is beamed inside an astonishing digital world and becomes part of the very game he is designing. Complete with hours of never-before-seen bonus material it's an epic adventure that... everyone will enjoy! [show more]

An action sci-fi tale set inside a computer where video games become a real-life struggle for survival, where energy lives and breathes, and where light takes on many new dimensions.

Disney's classic first venture into the field of computer-generated animation. Whizz-kid computer programmer Kevin Flynn (Jeff Bridges) tries to hack into the ENCOM computer system, but his efforts are continually frustrated by the Master Control Program. One night he is actually transported into the system, where he again comes up against the oppressive totalitarian forces of the Master Control Program, and realises that his best chance of survival in this virtual world is to set out in search of the security program TRON.