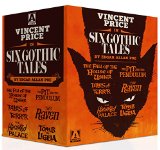 From the Merchant of Menace Vincent Price and the King of the Bs Roger Corman come six Gothic tales inspired by the pen of Edgar Allan Poe. In The Fall of the House of Usher a young man learns of a family curse that threatens his happiness with his bride-to-be. In The Pit and the Pendulum a brother investigates the untimely death of sister played by Barbara Steele. Tales of Terror adapts three Poe classics Morella The Black Cat and The Facts in the Case of M. Valdemar each starring a horror icon. The Raven is a comic take on the famous poem concerning three... rival magicians. In The Haunted Palace a newcomer in a New England town is suspected of being a warlock. And in The Tomb of Ligeia filmed in Norfolk and at Stonehenge a widower's upcoming marriage plans are thwarted by his dead first wife. The six films boast a remarkable cast list: not just Price and Steele (Black Sunday) but also Boris Karloff (Frankenstein) Peter Lorre (M The Beast with Five Fingers) Lon Chaney Jr (The Wolf Man Spider Baby) Basil Rathbone (The Black Cat) and a very young Jack Nicholson. Adapted for the screen by Richard Matheson (The Twilight Zone I Am Legend) and Robert Towne (Chinatown) these Six Gothic Tales now rank as classic examples of sixties horror cinema. Special Features: Limited Edition boxed-set High Definition Blu-ray (1080p) presentation of all six features presented across six Blu-rays Original uncompressed mono PCM Audio for all films Optional English subtitles for the deaf and hard of hearing for all films Numerous new and archive commentaries interviews and featurettes for each film! The Directors: Roger Corman an hour-long documentary on the filmmaker featuring contributions from James Cameron Martin Scorsese and Ron Howard Original Theatrical Trailers Reversible sleeves featuring original and newly commissioned artwork for all six films Limited edition 200-page collector's book containing new writing on all films plus reprints and reproductions to be announced soon! [show more]