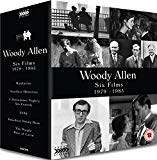 Arrow Academy's second Woody Allen collection covers 1979-85, during which he made many of his best-loved films. These begin with Manhattan, a sublime Gershwin-scored Panavision love-letter to his home city, and end with The Purple Rose of Cairo, a wistfully affectionate romance about the cinema's past that also doubles as a hilariously fantastical farce. In between there's the Felliniesque, fascinatingly self-analytical Stardust Memories; the bucolic romp A Midsummer Night's Sex Comedy (the first of thirteen films starring Mia Farrow); the technically and conceptually... astonishing Zelig, in which a human chameleon bears witness to many of the 1920s and 30s cultural and political upheavals; and the perfectly-formed Broadway Danny Rose, a comedy about a theatrical agent who gets mixed up with the Mob. By now, Allen was working with a tightly-knit regular team: cinematographer Gordon Willis, designer Mel Bourne, editor Susan E. Morse and producer Robert Greenhut worked on nearly all of these, achieving an enviable consistency of style at a time when American cinema was moving away from the notion of the auteur director. Collection includes: ¢ Manhattan (1979) ¢ Stardust Memories (1980) ¢ A Midsummer Night's Sex Comedy (1982) ¢ Zelig (1983) ¢ Broadway Danny Rose (1984) ¢ The Purple Rose of Cairo (1985) ¢ Exclusive to this collection: Manhattan and a hardback book featuring new and archive writing on all the films. [show more]

Collection of six classic Woody Allen films. 'Manhattan' (1979) follows Isaac Davis (Allen), a TV writer struggling to contain his frustration with his stuttering career and complicated love life. An on-off affair with teenage drama student Tracy (Mariel Hemingway) is blighted by his anxiety about their age difference, whilst his attraction to the pretentious Mary (Diane Keaton) is complicated by the fact that she is already having an affair with his married friend Yale (Michael Murphy). Meanwhile, Davis also has to contend with his lesbian ex-wife (Meryl Streep) as she prepares to dish the dirt about their marriage in a forthcoming book. 'Stardust Memories' (1980) tells the story of Sandy Bates (Allen), a comic film-maker who no longer considers himself funny. He decides to move into serious film-making, but his efforts are poorly received by critics and the public alike. He withdraws to the Stardust Hotel, where a retrospective of his work is being run, and ends up reflecting on his life, his loves and his art. In 'A Midsummer Night's Sex Comedy' (1982), three couples spend a weekend together to celebrate one of their weddings. Inventor Andrew (Allen) and Adrian (Mary Steenburgen) are the hosts, while his cousin Dr Leopold (José Ferrer) has arrived to marry his fiancé Ariel (Mia Farrow). However, Andrew begins to lust after Ariel, as does Dr Maxwell Jordan (Tony Roberts), who has brought along his nurse, Dulcy (Julie Hagerty). There follows a multitude of seductions and sexual misadventures with the bride and groom saying 'I do' to everyone but each other. In 'Zelig' (1983), during the years of the Depression, Leonard Zelig (Allen) uses his chameleon-like powers to become a minor celebrity. He is seen watching Babe Ruth hitting a home run, cheering Adolf Hitler and rubbing shoulders with Roosevelt. Zelig becomes so celebrated that a psychiatrist takes him on as a patient, and soon falls in love with him. In 'Broadway Danny Rose' (1984), hopeless theatrical agent Danny (Allen) tries to revive the career of Lou Canova (Nick Apollo Forte), a singer who is involved with the Mafia. Unable to perform without his mistress Tina (Farrow) at his concerts, Danny offers to bring her along as if she was his girlfriend so as not to arouse suspicion with Lou's wife. However, the pair soon find themselves running for their lives, when two mobsters mistakenly think Danny is attempting to make a move on Tina behind Lou's back. Finally, 'The Purple Rose of Cairo' (1985) follows Cecilia (Farrow), a bored waitress who has a womanising slob for a husband and who regularly visits her local cinema in order to escape from the harsh realities of Depression-era America. One night, while re-watching her latest favourite 'The Purple Rose of Cairo', the film's hero (Jeff Daniels) steps down from the screen and asks her to show him around. A fantasy love affair ensues, but the couple's bliss soon comes under threat from Cecilia's husband, the bemused actor whose fictional alter-ego has gone walkabout, and the studio who want their character back on the screen.