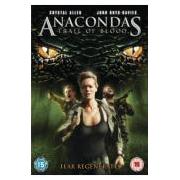 The genetically enhanced snakes from Anaconda 3: Offspring are dead but one of their slithering offspring has regenerated to live on in this next action-packed chapter of the Anaconda franchise. The dying mogul Murdoch (Emmy-Nominated actor John Rhys-Davies) hires a doctor to harvest a fresh supply of blood orchids and experiment with the regenerative nectar on a baby snake. Overnight the offspring grows monstrous enough in size and appetite to devour the good doctor whole before slithering free on a regenerative rampage. The beautiful herpetologist Amanda (Crystal... Allen) dedicated to destroying the vicious beasts she helped create leads a team of young scientists against a ruthless pack of Murdoch's armed thugs to get the coveted orchids before the snake hunts both factions down. The bloodthirsty offspring is seemingly invincible sliding through explosions and gunfire only to regenerate and prey insatiably on anything in its path. [show more]

Fourth instalment of the reptilian horror franchise. The baby anaconda captured at the end of 'Anaconda 3' has become the subject of experimentation for a leading scientist who creates a cell regeneration serum that enables the snake to multiply at an alarming rate. When the scientist mysteriously disappears and the snakes escape, dying millionaire Murdoch (John Rhys-Davies) sends a team to track him down, and Dr Amanda Haze (Crystal Allen) - determined to destroy the serum and kill the mutant snakes - also joins in the frantic search.