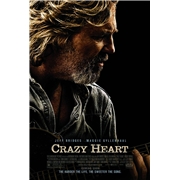 Please note this is a region 2 DVD and will require a region 2 or region free DVD player in order to play Bad Blake (Jeff Bridges) is a broken-down hard-living country music singer who&39;s had way too many marriages far too many years on the road and one too many drinks way too many times And yet Bad can&39;t help but reach for salvation with the help of Jean (Maggie Gyllenhaal) a journalist who discovers the real man behind the musician Actors Jeff Bridges James Keane Anna Felix Paul Herman Tom Bower Ryan Bingham Beth Grant Rick Dial & Maggie Gyllenhaal Director Scott Cooper Certificate 15 years and over Year 2009 Screen Widescreen Languages English - Dolby Digital (51) Subtitles English ; English for the hearing impaired ; Danish ; Finnish ; Norwegian ; Swedish Closed Captions Yes

Scott Cooper writes and directs this drama based on the 1987 novel by Thomas Cobb, starring Jeff Bridges, in a Golden Globe and Oscar-winning performance, as burned-out country singer Bad Blake. Blake has lived his life hard, fast and recklessly. With several marriages in tatters behind him and too many years spent drinking one more for the road, his life has become a parody of the bittersweet songs on which his once-promising career was built. When divorced journalist Jean (Maggie Gyllenhaal) persuades the reluctant singer to give her an interview, a relationship develops between them that gives Blake one last chance for redemption. The song 'The Weary Kind' gained the film its second Oscar at the 2010 awards.