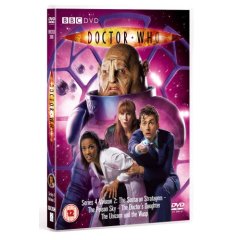 Hot on the heels of the acclaimed third series Doctor Who returns for a fourth instalment with a familiar face alongside the Doctor. Award-winning comedienne Catherine Tate returns as the Doctor's new companion revisiting her role as Donna Noble who featured in the 2006 Christmas special The Runaway Bride. Martha Jones - who left the Doctor at the end of Series Three to break the unrequited circle of love she felt for him - also returns. Set Comprises: The Sontaran Stratagem: Martha Jones summons the Doctor back to modern-day Earth but an old enemy lies in wait. The... Poison Sky: As the Sontarans choke the Earth the Doctor battles to keep both Martha and Donna alive. The Doctor's Daughter: On the planet Messaline in the middle of an endless war the Doctor meets the most important woman of his life. The Unicorn And The Wasp: In 1926 Agatha Christie disappeared for 10 days. Was it amnesia? A nervous breakdown? Or a Giant Alien Wasp..? [show more]

Episodes 4-7 from the fourth series of the BBC's relaunched version of the sci-fi classic, starring David Tennant as the legendary Time Lord. Comedienne Catherine Tate co-stars as the Doctor's assistant, Donna Noble. Also making a return is Martha Jones (Freema Agyeman), who left the Doctor to break the unrequited circle of love she felt for him. Episodes comprise: 'The Sontaran Stratagem', 'The Poison Sky', 'The Doctor's Daughter' and 'The Unicorn and the Wasp'.