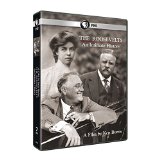 THE ROOSEVELTS: AN INTIMATE HISTORY chronicles the lives of Theodore Franklin and Eleanor Roosevelt three members of the most prominent and influential family in American politics. It is the first time in a major documentary television series that their individual stories have been interwoven into a single narrative. This seven-part 14 hour film follows the Roosevelts for more than a century from Theodore’s birth in 1858 to Eleanor’s death in 1962. The series encompasses the history the Roosevelts helped to shape: the creation of National Parks the... digging of the Panama Canal the passage of innovative New Deal programs the defeat of Hitler and the postwar struggles for civil rights at home and human rights abroad. It is also an intimate human story about love betrayal family loyalty personal courage and the conquest of fear. Features: A definitive look at one of the great families in American history. An all-star cast includes Paul Giamatti as Theodore Roosevelt Edward Herrmann as Franklin Roosevelt and Meryl Streep as Eleanor Roosevelt. Release timed to coincide with the UK television premiere on PBS America (Sky 534 & Virgin Media 243). Packed with bonus material. [show more]