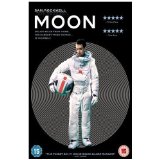 Sam Bell (Sam Rockwell) lives a lonely life - three long years on a moon base mining a precious gas but things start to unravel for the astronaut at an alarming rate! Who is he? Why is he there? And is he really alone?

Please note this is a region 2 DVD and will require a region 2 (Europe) or region Free DVD Player in order to play Sam Bell is nearing the completion of his 3-year-long contract with Lunar Industries mining Earth&39;s primary source of energy on the dark side of the moon Alone with only the base&39;s vigilant computer Gerty as his sole companion Bell&39;s extended isolation has taken its toll His only link to the outside world comes from satellite messages from his wife and young daughter He longs to return home but a terrible accident on the lunar surface leads to a disturbing discovery that contributes to his growing sense of paranoia and dislocation so many miles away from home Actors Sam Rockwell Kevin Spacey Dominique McElligott Rosie Shaw Adrienne Shaw Directors Duncan Jones Writers Duncan Jones Nathan Parker Producers Alex Francis Bil Bungay Bill Zysblat Deepak Sikka Julia Valentine Language English Subtitles Mandarin Chinese English Hindi Indonesian Thai Subtitles For The Hearing Impaired English Number of discs 1

Duncan Jones, who won the 2010 BAFTA for Most Promising Newcomer, writes and directs this critically-acclaimed space isolation drama starring Sam Rockwell as Sam Bell, a worker for Lunar Industries who is nearing the end of a three-year contract to mine the moon's surface for the precious gas Helium 3, the solution to Earth's energy crisis. As he approaches his return to Earth, Sam reflects on the lessons he has learned during his prolonged isolation and looks forward to his reunion with his wife and young daughter. But a fortnight before his departure he starts seeing and hearing strange things that lead him to suspect that his employers intend to replace him in a far more sinister way than he imagined. Kevin Spacey provides the voice for Sam's only companion, a small robot called Gerty.