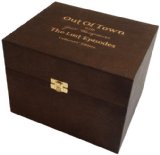 Out Of Town - The Lost Episodes with Jack Hargreaves DVD

Jack Hargreaves loved a good story, and the story of how the lost episodes of Out of Town came back to light is one that would have fascinated him. The story began on 31st December 1981. The Southern ITV franchise was at an end, and Jack packed up and left Southampton TV Centre for the last time. He had been working there non-stop since 1959, and would not return to the building for a number of years. For over 20 years Out Of Town was a television programme that provided a window on country ...

Out Of Town - The Lost Episodes with Jack Hargreaves