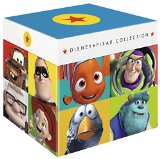 Collection of animated feature films and shorts from Disney Pixar. 'Toy Story' (1995) follows the adventures of a group of toys which come to life as soon as their owner, Andy (voice of John Morris), leaves the room. Pull-string cowboy Woody (Tom Hanks) and Andy's new favourite toy Buzz Lightyear (Tim Allen) have an ongoing feud but are forced to team up when they find themselves stranded in the real world. In 'A Bug's Life' (1998), with his colony terrorised by evil grasshoppers, worker ant Flik (David Foley) sets off to find help in the big city, where he mistakes a troupe of circus bugs for fierce warriors. In 'Toy Story 2' (1999) the toys go on a rescue mission to save Woody when he is kidnapped by toy collector Al (Wayne Knight), who plans to sell him to a Japanese toy museum. In 'Monsters, Inc.' (2001) Sulley (John Goodman) and sidekick Mike (Billy Crystal) are the top scaring team on the job at an energy firm where their task is to keep Monstropolis ticking over, running it on the power generated by children screaming. Believing children are toxic, dangerous creatures who must be kept out of Monstropolis at all costs, Mike and Sulley are terrified when they realise that a little girl called 'Boo' (Mary Gibbs) has followed them back through a door. In 'Finding Nemo' (2003), when motherless clownfish Nemo (Alexander Gould) is carried away from his home in Australia's Great Barrier Reef, his overprotective father, Marlin (Albert Brooks), and Dory (Ellen DeGeneres), a friendly but forgetful regal blue tang fish, go to his rescue. In 'The Incredibles' (2004) former superheroes Bob Parr aka Mr. Incredible (Craig T. Nelson) and his wife Helen aka Elastigirl (Holly Hunter) have adopted civilian identities and now live in the suburbs with their three children. Fighting boredom and a bulging waistline, Bob gets a chance to return to action when a mysterious communication summons him to a remote island for a top secret assignment. In 'Cars' (2006) successful rookie racer Lightning McQueen (Owen Wilson) crashes through Radiator Springs on Route 66 and is forced to remain in town until he repairs the damage he has caused. At first, the tight-knit community doesn't accept Lightning's bad attitude but he begins to win them over as he learns the importance of friendship. In 'Ratatouille' (2007) rat Remy (Patton Oswalt) dreams of becoming a great French chef but must overcome the obstacle of working in a decidedly rodent-phobic profession. In 'WALL-E' (2008), 700 years after humanity has left Earth, robot WALL-E (Ben Burtt) fills his days collecting rubbish and anything else that takes his fancy, trying to fend off the boredom of his lot. But he has unknowingly discovered a secret that could make the once beautiful planet habitable again, enabling humankind to return. In 'Up' (2009) 70-something retired balloon salesman Carl Fredricksen (Edward Asner) decides to use his twilight years to fulfil his lifelong dream of travelling through the wilds of South America. Tying thousands of balloons to his house, he lifts off for his big adventure - only to discover that he has inadvertently brought a stowaway along with him in the form of eight-year-old wilderness explorer Russell (Jordan Nagai). In 'Toy Story 3' (2010), when Andy clears out his bedroom in preparation for starting college, Woody, Buzz and the rest of the toy-box gang are donated to a local nursery school and find themselves at the mercy of a horde of wild, sticky-fingered toddlers. Eager to return home, the toys make a series of elaborate escape attempts. In 'Cars 2' (2011), when slow-witted tow truck Mater (Larry the Cable Guy) travels to Tokyo with his superstar friend Lightning McQueen for the World Grand Prix, he is mistaken for a brilliant international spy, despite his unassuming appearance. In 'Brave' (2012) headstrong tomboy and skilled archer Princess Merida (Kelly Macdonald) attempts to break with tradition and carve out her own path in life but her actions lead to chaos in the kingdom. In 'Monsters University' (2013), after meeting in college, Sulley and Mike soon become rivals. When they are rejected from the 'Scare' programme, however, the two put their differences aside and work together in order to fulfil their ambition to become scarers. 'Pixar Short Films Collection: Volume 1' features 13 animated shorts which comprise: 'The Adventures of André and Wally B.' (1984), 'Luxo Jr.' (1986), 'Red's Dream' (1987), 'Tin Toy' (1988), 'Knick Knack' (1989), 'Geri's Game' (1997), 'For the Birds' (2000), 'Mike's New Car' (2002), 'Boundin'' (2003), 'Jack-Jack Attack' (2005), 'One Man Band' (2005), 'Mater and the Ghostlight' (2006) and 'Lifted' (2006). 'Pixar Short Films Collection: Volume 2' features 12 animated shorts which comprise: 'Your Friend the Rat' (2007), 'Presto' (2008), 'BURN-E' (2008), 'Partly Cloudy' (2009), 'Dug's Special Mission' (2009), 'George and A.J.' (2009), 'Day and Night' (2010), 'Hawaiian Vacation' (2011), 'Air Mater' (2011), 'Small F