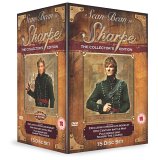 This Sharpe box set contains all 14 of the full-length television films based on the novels by Bernard Cornwell Originally broadcast between 1993 and 97 they follow the adventures of the titular soldier during the later years of the Napoleonic Wars through Wellington&39;s Peninsular campaign up to and including Waterloo The programmes represent an outstanding achievement for the small screen dominated by Sean Bean&39;s central performance as the heroic troubled outsider who turns out to be a resourceful and loyal leader Bolstered by a strong supporting cast particularly Daragh O&39;Malley as Harper and (in later episodes) Abigail Cruttenden as Jane Sharpe is often visually striking the action tense and gripping Consistency is maintained by all episodes being directed by Tom Clegg