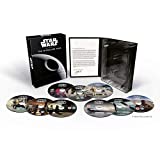 Star Wars: The Skywalker Saga boxset (9 discs) featuring all 9 Saga movies on DVD: Episode I: Phantom Menace The republic of Naboo battles the Nimoudian federation; Darth Vader is a 9 year old boy named Anakin Skywalker, and Obi Wan Kenobi is a brash young Jedi knight. Episode II: Attack Of The Clones This is the second installment of the prequels set in a time period prior to that of the original three star war films. Episode III: Revenge Of The Sith In this dark and final instalment of the prequel trilogy, the galaxy, two years into the Clone Wars, is divided... between Count Dooku's Confederacy of Independent Systems and the Republic, which is led by Chancellor Palpatine. In the political unrest, Palpatine schemes to end the Jedi order, dissolve the Republic and declare himself Emperor of the Galactic Empire, using his clone army and Sith Warriors to do so. Lured by the power offered to him by Palpatine, Anakin draws closer to the Dark Side. To complicate matters, he and Padme are parents to twins - Luke and Leia. Fearful of Anakin's turn to the Dark Side, Obi-Wan confronts his former student and tries to dissuade him from joining ranks with the Sith. However, Obi-Wan and Anakin face each other in a duel - leaving Anakin wounded and presumed dead. Palpatine seizes the opportunity and takes the injured Jedi under his wing. Using technology to help heal Anakin, Palpatine creates a new and very powerful Sith warrior - Darth Vader. With Vader at his side, Palpatine lays waste to the Jedis and Dooku's army and succeeds in creating the new Empire. Now, Obi-Wan and the last remaining Jedis must rally to save the twins, who have been separated to be raised unaware of each other's existence, and Princess Padme in hopes that someday the next generation will lead a revolution to unseat Darth Vader and the newly crowned Emperor Palpatine. Episode IV: A New Hope A farmboy, a princess and a swahbuckling renegade band together to lead a motley group of rebels and robots against the evil galactic empire in George Lucas's space fantasy. Episode V: The Empire Strikes Back Second chapter of George's 'Star Wars' Trilogy finds Luke Skywalker training to be a Jedi Knight and Han Solo and Princess Leia eluding Darth Vader. Episode VI: Return Of The Jedi Luke Skywalker is reunited with his comrades for a final battle with Darth Vader and the evil galactic empire in this third instalment in George Lucas' Star wars saga. Episode VII: The Force Awakens Visionary director J.J. Abrams brings to life the motion picture event of a generation. As Kylo Ren and the sinister First Order rise from the ashes of the Empire, Luke Skywalker is missing when the galaxy needs him most. It's up to Rey, a desert scavenger, and Finn, a defecting stormtrooper, to join forces with Han Solo and Chewbacca in a desperate search for the one hope of restoring peace to the galaxy. Episode VIII: The Last Jedi The Skywalker saga continues as the heroes of The Force Awakens join the galactic legends in an epic adventure that unlocks new mysteries of the Force. Episode IX: The Rise Of Skywalker Lucasfilm and director J.J. Abrams join forces once again to take viewers on an epic journey to a galaxy far, far away with Star Wars: The Rise of Skywalker, the riveting conclusion of the seminal Skywalker saga, where new legends will be born and the final battle for freedom is yet to come. [show more]