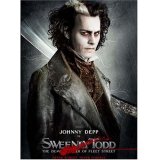 Based on the hit Broadway musical telling the tale of the infamous Benjamin Barker, a.k.a Sweeney Todd (Johnny Depp), who sets up a barber shop in ye olde London town.

Tim Burton's film version of the Stephen Sondheim musical starring Johnny Depp and Helena Bonham Carter. Based on a 'penny dreadful' tale (which later became an urban myth) from the mid-19th Century, this musical tells the tale of Benjamin Barker (Depp), a barber who returns to London after spending years in exile for a crime he didn't commit. He soon discovers from pie-maker Mrs Lovett (Bonham Carter) that, in his absence, his wife has taken her own life and his daughter is now in the care of the man who had him sent away - the dastardly Judge Turpin (Alan Rickman). Seeking revenge and filled with a murderous rage, Barker sets up a barber's shop above Mrs Lovett's premises. Now calling himself Sweeney Todd, Barker kills off all his customers with a razor to the throat and sends their cadavers to the shop below to be used as a tasty new filling for Mrs Lovett's meat pies. What was once the worst pie shop in London quickly becomes one of the city's most popular eateries, but Barker won't be satisfied until he can lure Judge Turpin into the barber's chair...