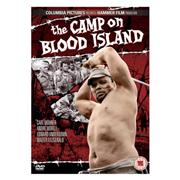 The Camp on Blood Island DVD

The Malay Peninsula, 1945- The prisoner-of-war camp on Blood Island is commanded by the brutal Colonel Yamamitsu (Ronald Radd) and his sadistic henchman, Captain Sakamura (Marne Maitland). Aware that his war crimes will condemn him, Yamamitsu has vowed to slaughter all his prisoners if Japan surrenders. Inmates Colonel Lambert (Andre Morell) and Piet Van Elst (Carl Mohner) discover that the war is over. They desperately try to keep the fact secret from their captors in the hope that the camp will be liberated. Lambert struggles to maintain discipline while his... men, and the women held captive in a neighbouring compound, fight for their lives... Special Features: Picture Gallery 24-page illustrated booklet by Hammer Films This Official UK DVD is Region 2,4,5 [show more]

Please note this is a region 2 DVD and will require a region 2 (Europe) or region Free DVD Player in order to play. Deep in Malaya, as World War II is rapidly coming to an end, men, women and children, trapped by the Japanese invasion, are held captive in the Blood Island prison camp. Knowing that Yamamitsu, the sadistic commandant, will murder them all when he learns of his country's defeat, Dutch, a Dutch planter, smashes the camp radio. British officer Lambert and, in the women's prison, the recently-widowed Kate, join Dutch in arming the prisoners.

1950s' war drama set in a Japanese prison camp in Malaya at the end of the Second World War. As the British prisoners on Blood Island learn of Japan's defeat in the war, they fear that the Japanese commandant, Yamamitsu (Ronald Radd), will kill them. They attempt to hide the knowledge of their victory from the malicious commandant while they plan how to evade their captors. British officer Lambert (Andre Morell) is among the prisoners leading the escape attempt.

The Camp on Blood Island