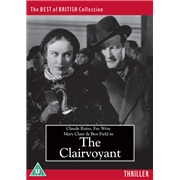 The Great Maximus (Claude Rains - Casablanca Lawrence of Arabia) has got a new act for the music halls where he makes his living. Working with his beautiful wife Rene (Fay Wray - King Kong) he poses as a mind reader. It's all a trick of course: he certainly doesn't have the gift for real. Or so he thinks... When he correctly predicts a terrible train crash Maximus becomes an instant celebrity. But his new-found fame and his friendship with sultry Christine Shawn (Jane Baxter) threatens his marriage. Worse is to come: he is accused not of foreseeing accidents but actually... causing them... [show more]

1930s thriller starring Claude Rains as music hall performer Maximus. Along with his wife, Rene (Fay Wray), Maximus tricks his audiences into believing he has psychic powers. When he foresees a terrible accident, however, he realises that his act is maybe more than just pretence after all. Realising their may be a connection between his predictions and the attractive Christine Shawn (Jane Baxter), Maximus forms a friendship with her, sparking trouble in his marriage. The situation gets even worse when Maximus is blamed for causing the accidents he has predicted.