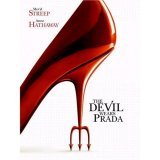 Anne Hathaway finds herself working for the boss (Meryl Streep) from hell in this new black comedy.

Please note this is a region 2 DVD and will require a region 2 (Europe) or region Free DVD Player in order to play. When bookish Northwestern grad Andy Sachs interviews to become fashion magazine editor Miranda's newest lackey, Miranda hires her not for her lacklustre wardrobe but for her intellect. Inside the pristine offices, Andy suffers through a never-ending list of impossible tasks, and is the subject of constant harassment by Miranda's jealous first assistant. But to the dismay of her boyfriend and close friends, Andy slowly finds herself seduced by the glamorous world of fashion, and by Miranda herself.

Comedy based on the novel by Lauren Weisberger. Andrea (Anne Hathaway) is a bright young woman from the Midwest who has just graduated from college and wants to work as a magazine writer. She has applied for a job at 'Runway', America's most prestigious fashion journal. Andy has little interest in the garment trade, but it is one of the only magazines in New York with a job opening - second assistant to editor Miranda Priestly (Meryl Streep). As Andy discovers, Miranda is a diva with plenty of power in the magazine business, and she isn't afraid to use that power. Though Andy lands the job, she soon learns that working for Miranda could test the patience of a saint, thanks to her endless demands and refusal to acknowledge the end of a work day. Andy struggles to hold on to the job and her sanity, knowing that a recommendation from Miranda can open nearly any door at any magazine - but can she handle the pressure without losing her mind along the way?