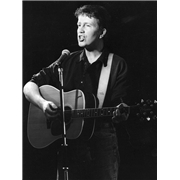 Tom Robinson is one of the first titles released from the ITV Live Archive Concert Series a multi-part music concert series featuring some of the biggest names in the UK music scene from the 70's 80's and 90's. This series features rare and previously unavailable music concerts long laying dormant in ITV's archives and include live performances and studio sessions by international hit-makers such as Status Quo Belinda Carlisle Pulp Motorhead Wishbone Ash Spandau Ballet and many more. The singer-songwriter bassist and radio presenter is best known for the hits Glad... to Be Gay 2-4-6-8 Motorway and Don't Take No for an Answer with his Tom Robinson Band. He later peaked at #6 in the UK Singles Chart with his solo single War Baby. [show more]

More DVDs Directed by none