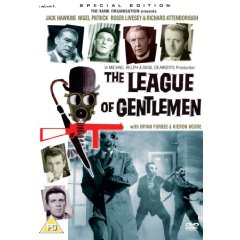 British comedy-thriller in the Ealing mode. After 25 years of army service, Colonel Hyde's (Jack Hawkins) unblemished career ends abrubtly when he is retired. However, before leaving he steals some information, and, once outside, puts together a top team of ex-army gents (all experts in their own field), and trains them for a meticulously planned bank job, 'Operation Golden Fleece'.

The League Of Gentlemen Special Edition