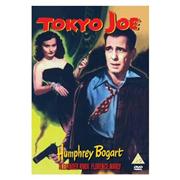 Humphrey Bogart plays Saloonkeeper Joe Barrett in postwar Tokyo. With an interesting cast including Alexander Knox and an outstanding performance by Sessue Hayakawa (Bridge on the River Kwai) as the japanese gang lord. Florence Marly adds a european/international touch as White Russian Cabaret singer. The theme of postwar Japan is rarely touched on, and like Sam Fuller's 'House of Bamboo', Tokyo Joe takes a long, slow look at the underbelly of Japan's postwar milieu. Like Casablanca, this film has all the elements, haunting theme music, guns, girls and gangsters with... a whiff of geopolitical intrigue. [show more]

Drama starring Humphrey Bogart as Joe Barrett, an American who returns to Tokyo three years after the Second World War and attempts to pick up threads of his life in the city before the war. He hopes to return to his bar, Tokyo Joe's, and his wife Trina (Florence Marly), with whom he has a seven-year-old daughter - but circumstances have changed greatly since he left and he runs into troubles of both a personal and a political nature as he struggles to straighten things out.