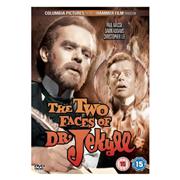 London, 1974- Scientist Henry Jeklyy (Paul Massie) obsessively pursues his secret research, while is wife Kitty (Dawn Addams) embarks on an affair with parasitic scoundrel Paul Allen (Christopher Lee). Jekylls latest experiment is a success and he injects himself with a serum that transfers him into Edward Hyde, a devilishly handsome hedonist. Hyde discovers Kittys affair, but befriends Paul and honours his gambling debts. Paul acts as Edwards guide to Londons seediest nightspots, unaware that his new benefactor is suffering from a split personality. As Henry Jekyll... struggles to reassert himself, the ruthless Hyde takes whatever, and whoever he wants, killing who gets in his way... [show more]