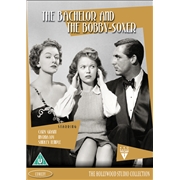 Bachelor and the Bobby-Soxer DVD

Starring Cary Grant at his effortless best The Bachelor and the Bobby-Soxer s a sly screwball comedy of misplaced affections. The Bachelor is Dickie Nugent (Grant) a sophisticated and debonaire artist - no wonder Bobby-Soxer Susan Turner (Shirley Temple) develops such a crush on him. It doesn't matter to her that she's just seventeen and he's in his forties... When Susan is found in Dickie's studio after hours he's hauled before the judge - who just happens to be Susan's older sister Margaret (Myrna Loy). Although convinced that Dickie is blameless Margaret devises... an inventive punishment - he has to take Susan out on 'dates' until her infatuation fades. But how long will that take...? [show more]

1940s romantic comedy starring Cary Grant, Myrna Loy and Shirley Temple. Judge Margaret Turner (Loy), exasperated by art lecturer Dick Nugent (Cary Grant) when he appears before her after a nightclub fracas, orders him to take out her teenage sister Susan (Shirley Temple), who has formed an adolescent crush on him. Soon, however, Margaret finds herself attracted to her sister's new beau...

Bachelor and the Bobby-Soxer