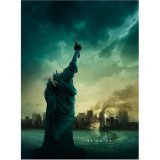 A monster attacks New York and the ensueing carnage is told from the point of view of a small group of friends with a video camera.

A highly-classified video tape confiscated by the U.S. military shows the devastating effects of a monster attack on New York City. Crudely shot on handycam by a group of friends at a party, the film quickly evolves into a blow-by-blow account of the most surreal and terrifying ordeal of their young lives...

Visually explosive sci-fi tale of the night a monstrous creature attacks the city of New York. When five young friends get together to hold a going-away party for one of their number, their celebrations are violently curtailed by a series of huge tremors felt throughout the city. As panic begins to spread, it soon becomes apparent that New York is under attack from some huge malevolent force intent on destroying the city. Told in a jerky, documentary style, from the perspective of a hand-held camera, the film chronicles the attempts by the group to make their way, with chaos raining down, towards the destruction in order to rescue another friend.