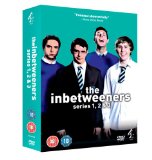 The Inbetweeners is a series about four teenagers growing up in suburbia; a world of futile crushes sibling brawls getting drunk too quickly fancying the girl next door casting aspersions on your friend's sexuality and riding rollercoasters.

The Inbetweeners Series 1-3 boxset follows the often misguided footsteps of four friends, Will, Simon, Neil and Jay, as they try to navigate their way through sixth form, with their hormones running riot.   None of our heroes are exceptional, all are distinctly average: Will is constantly trying to raise their social standing, Simon is a hopeless romantic who is obsessed with schoolmate Carli, Neil is sometimes so slow it's more like owning a pet than having a friend, and Jay is a borderline sex pest constantly bragging about imaginary sexual experiences.     Actors Simon Bird, Joe Thomas, James Buckley & Blake Harrison Certificate 18 years and over Year 2008 - 2010 Languages English Region Region 2 - Will only play on European Region 2 or multi-region DVD players.

All 18 episodes from series 1-3 of the comedy drama following the lives and trials of four new sixth-formers. With his parents recently divorced, private school boy Will McKenzie (Simon Bird) has to move into the sixth form at the local comprehensive. After an initial rough patch, not helped by dressing like the archetypal geek and carrying a briefecase, he makes friends with Simon (Joe Thomas), Neil (Blake Harrison) and Jay (James Buckley), who, although they're slightly more streetwise, are just as uncool. Desperately trying to raise their kudos, they soon embark on a series of embarrassing atttempts to try and woo the opposite sex, with varying degrees of success. Series 1 episodes are: 'The First Day', 'Bunk Off', 'Thorpe Park', 'Girlfriend', 'Caravan Club' and 'Xmas Party'. Series 2 episodes are: 'The Field Trip', 'Work Experience', 'Will's Birthday', 'Night Out in London', 'The Duke of Edinburgh Awards' and 'Exam Time'. Series 3 episodes are: 'The Fashion Show', 'The Gig and the Girlfriend', 'Will's Dilemma', 'Trip to Warwick', 'Home Alone' and 'Camping Trip'.