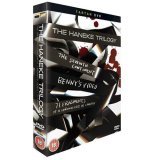 The Seventh Continent (1989): Described by Haneke as a reflection on ""the progressive emotional glaciation of Austria "" The Seventh Continent focuses on George (Dieter Berner) a middling engineer and his sardonic wife Anna (Birgit Doll). Unable to empathize with their daughter's compulsion for lying and uninterested in each other's emotional well-being the couple turns their pedestrian way of life into a vortex of subjective malaise. And while a recurring ad for an Australian vacation stands as a signal of potential blissfulness the couple's perfunctory melancholy... eventually materialized into barbarism. Based on a true story and filmed as a succession of beautifully composed and yet mundane tableaux this unsentimental depiction of individual and family collapse ""ranks among the most truly terrifying in modern cinema"" (Michael Wilmington Chicago Tribune). More than a metaphor of hope and escape The Seventh Continent is a meticulous dive into the postmodern disregard of affect - and a stark look at lives severed from feelings. Benny's Video (1993): Winner of the FIPRESCI award given by the International Federation of Film Critics in 1993 Benny's Video is the second installment of Michael Haneke's (The Piano Teacher Cache) ""emotional glaciation"" trilogy. Written and directed by Haneke the bone-chilling story opens with the amateur footage of a pig being slaughtered with a butcher gun. This unceremonious recording is owned by 14-year-old Benny (Arno Frisch; Haneke's Funny Gamers) a boy whose preferred mediums of experience are video cameras action movies and the surveillance monitors placed in his room. Accustomed to a trite routine of school activities daily visits to a local video store and hours in front of his bedroom TV Benny finds himself enthralled by his tape of a slaughtered swing. Staying alone is his parents' apartment Benny eventually brings home an unknown girl immediately exposing her to the rapturous videotaping. Then after revealing that he stole the gun that took the pig's life Benny coldly shoots his guest and turns his unwrought curiosity into a slaughter video franchise. ""I once saw a TV program about the tricks they use in action films "" says Benny. ""It's all ketchup and plastic."" By colliding the differences between frames and flesh Haneke's sophomore theatrical release offers a lucid depiction of human beings deprived of their capacity to empathize with - and be hurt by - others. 71 Fragments Of A Chronology Of Chance (1994): With his signature cold cerebral style his long slow takes and meticulous action Austrian director Michael Haneke presents a series of isolated scenes of unrelated people that culminates in an act of sudden and senseless violence in a bank. 71 Fragments Of A Chronology Of Chance delves into some of the prevalent themes of Haneke's earlier films The Seventh Continent and Benny's Video: existential isolation the oppressive force of contemporary western civilization the effects of television on human experience and sudden inscrutable violence. Similar to Antonioni Haneke has become one of the contemporary cinema's greatest provocateurs deliberately withholding crucial information and denying any audience expectation. The eerie and beautiful 71 Fragments Of A Chronology Of Chance hovers between a terrible nihilism and a tenuous humanism. [show more]