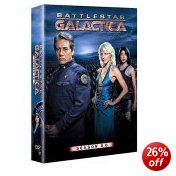 ""47 875 survivors in search of a home called Earth."" ""The cylons were created by man. They evolved. They rebelled. There are many copies. And they have a plan."" The Sci-fi Channel's hottest TV series returns as Battlestar Galactica 2.0 blasts onto DVD. As the epic second season begins the fight to save humanity rages on - even as civil war looms within the fleet between the followers of President Roslin and Commander Adama. Relive all the intensity and exciteme

Please note this is a region 2 DVD and will require a region 2 (Europe) or region Free DVD Player in order to play. This updated and re-imagined version of the classic 1970s sci-fi television show Battlestar Galactica combines elements of Star Trek, Star Wars, and The Terminator. Human beings built the android Cylons to work as servants for them, only to have the robots rebel and disappear into space. A generation later, however, the Cylons returned to destroy their former masters, and succeeded in eliminating the 12 worlds that mankind inhabited. Luckily, one group of people has managed to escape the genocide, led by Commander William Adama (Edward James Olmos), on board the massive space ship called Battlestar Galactica. But the struggle isn't over, as the ruthless Cylons continue to pursue the ship and the last surviving members of the human race. This vision of Battlestar Galactica features a darker tone and CGI special effects, and shares with other science fiction sagas a warning about the misuse of advanced technology.

Complete second series of the re-imagined American sci fi television series, where the pilots of the Galactica spacecraft battle against the evil Cylons, cyborg creatures that originally served mankind, but who now want humanity destroyed. After losing the initial battles, with all the colonies destroyed, mankind's last hope is to search for the fabled home planet of Earth. In this series, the fleet becomes separated after a Cylon attack, Adama (Edward James Olmos) recovers from the assassination attempt and retakes control of the Galactica, and Starbuck (Katee Sackhoff) leads a team down to a deserted planet in search of the fabled Tomb of Athena, which should provide them with the co-ordinates to the lost planet of Earth. Episodes are: 'Scattered'; 'Valley of Darkness'; 'Fragged'; 'Resistance'; 'The Farm'; 'Home (Part 1)'; 'Home (Part 2)'; 'Final Cut'; 'Flight of the Phoenix'; 'Pegasus'; 'Resurrection Ship (Part 1)'; 'Resurrection Ship (Part 2)'; 'Epiphanies'; 'Black Market'; 'Scar'; 'Sacrifice'; 'The Captain's Hand'; 'Downloaded'; 'Lay Down Your Burdens (Part 1)'; and 'Lay Down Your Burdens (Part 2)'.