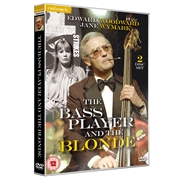 The Bass Player And The Blonde DVD

Edward Woodward and Jane Wymark star in a light-hearted drama tracing the unlikely romance between two seemingly mismatched runaways. The bass player is George Mangham, a world-weary, out-of-work jazz musician. The blonde is Terry, a beautiful, wealthy and decidedly determined young woman who fancies herself as a singer. He is twice her age and penniless - but she is in love with him. Having whisked Terry from under the nose of her bridegroom on her wedding day, Mangham flees with her in his battered Mini, and the unconventional couple begin their uphill struggle... for acceptance amid see-sawing fortunes and the interventions of Terry's furious father, Charlie. Released for the first time, this set brings together the ITV Playhouse pilot of 1977 - scripted by Roy Clarke (Last of the Summer Wine) - and the highly popular three-part series screened the following year, co-written by Ian Lindsay and Phil Redmond. With a combined cast featuring Ronald Fraser, George Sewell, Sam Kydd, Jeremy Sinden, Alfie Bass, Stanley Lebor and Barry Linehan, The Bass Player and the Blonde is directed by Dennis Vance (Special Branch) and features music specially composed by Jack Parnell. Episodes Rondo Allegro Andante [show more]

The Bass Player And The Blonde